I first became interested in martial arts when I was in school, I think it was in the 3rd year around 1977. 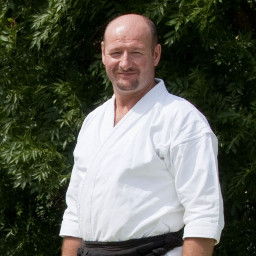 At the time there was a Shotokan karate club operating in the main hall after school. I visited the karate club and stayed for about 15 years, training in various locations, ending up at the Basingstoke Sports Centre.

I graded under the great Sensei Keinosuke Enoeda & Sensei Tomita reaching Shodan. In those days the training & grading were very physical.

I first met Sensei Derek Eastman back in 1997, when I noticed Aikido in the Basingstoke Sports centre. I followed some students into the Dojo and sat and watched. 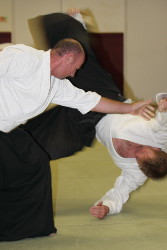 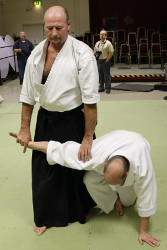 Sensei Eastman said, “Want to come on?“ I hesitated at first, then took my first steps onto the mat. I thought this is nice and soft. How wrong was I! Sensei said “Have you done any martial arts before?” I said only Karate. "Good, good," was his reply, then he said, “Come in and punch me in the stomach.” I was pretty quick and I hit him hard in the centre which rocked him back with shock.

Sensei said, “Not bad, but this time come in again harder.“ This time he moved and before I knew what was happening I was thrown with Iriminage. I really tried to hit him, as I thought this old man should not be able to use me as a rag doll. Since that day I was hooked. I started training that week with Sensei Eastman & Sensei Lyon and have never looked back. I still laugh to this day as he still applies the same instructions to new students just starting out, even now.