Having first joined the Abbe School of Judo in December 1959 and achieving 6th Kyu, I suffered a motorcycle accident and thus rejoined the Aikido group early in 1960.

Later that year I became Assistant Instructor to Henry Ellis Sensei who, being awarded 1st Dan by Abbe Sensei, became responsible for the 7th to 3rd Kyu section of Aikido within the School. 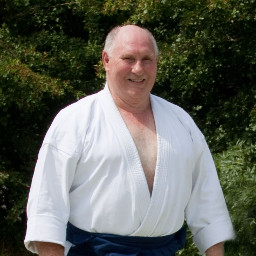 As assistant to Ellis Sensei and the 'Hut' Dojo, I was privileged to attend the special teaching classes set up for the many Aikido instructors who visited the U.K. at the invitation of Kenshiro Abbe Sensei. I was also able to learn Judo with Derek Tubb and Karate with David Williams and later with Harada Sensei. Along with Ellis Sensei, I attended Kendo classes at the Acton dojo of Tomio Otani Sensei, with whom we became good friends. These Dojos were under the direction of Kenshiro Abbe Sensei, with Ken Williams Sensei being the National Coach for Aikido and Principal of the Abbe School of Judo. 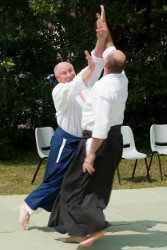 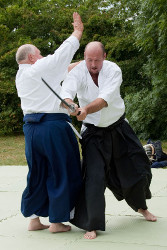 We were often sent to develop other new schools. This included introducing Aikido to the further education system in London and the American Air Force bases in Northolt. We later travelled for one year with no subsistence, having to rely on our resourcefulness to find work, which enabled us to visit and teach at various clubs and associations who had made contact with the ‘Hut’.

Ellis Sensei and myself were honoured to be asked by Kenshiro Abbe Sensei to participate at many British Judo Council displays and seminars including the infamous Japanese Martial Arts display at Lime Grove in London put on by the Japanese Embassy & the British Judo Council. This event was attended by Lady Olave Baden Powell with many dignitaries from embassies whose countries had affiliation with the World Scouting Organisation.

After my work had taken me to mainland Europe, enabling me to practice in Holland & Belgium, I formed the Basingstoke Aikido Club in Basingstoke, Hampshire, in 1968.

And personally represented the British Aikido Board for the Martial Arts Council at British Sports Council Meetings in London. 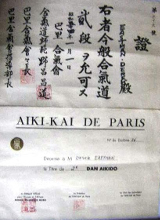 Sensei Eastman won the Individual Education award for his services to Aikido at the Basingstoke 2009 "Place to Be Proud of" Awards.